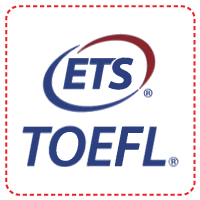 Test of English as a Foreign Language or TOEFL is a standardized test of English language proficiency for non-native English language speakers wishing to enroll in U.S. universities. The test is accepted by many English-speaking academic and professional institutions.TOEFL is one of the two major English-language tests in the world, the other being the IELTS.

TOEFL is a trademark of ETS (Educational Testing Service), a private non-profit organization, which designs and administers the tests. The scores are valid for two years; then they are no longer reported

To demonstrate English language proficiency, under-and post-graduates who need admission to US, Australian and Canadian universities must pass the TOEFL. The test measures candidates’ ability in terms of Speaking, Reading, Writing and Listening.

TEST CONTENT:
The TOEFL is arranged in four modules:

Reading Test
Listening Test
Speaking Test
Writing Test
SCORES : The TOEFL is on an overall score of 120. Each section is scored on 30. The Scores are reported within 2 weeks after the exams.

EXAM DIETS : Tests are taken throughout the year on monthly basis.